The Jurassic is the second period of the Mesozoic and is considered the golden age of the dinosaurs.

The start of the period is marked by the major Triassic–Jurassic extinction event. The Jurassic is named after the Jura Mountains within the European Alps, where limestone strata from the period were first identified. By the beginning of the Jurassic, the supercontinent Pangaea had begun rifting into two landmasses, Laurasia to the north and Gondwana to the south. This created more coastlines and shifted the continental climate from dry to humid, and many of the arid deserts of the Triassic were replaced by lush rainforests.

On land, the fauna transitioned from the Triassic fauna, dominated by both dinosauromorph and crocodylomorph archosaurs, to one dominated by dinosaurs alone. The first birds also appeared during the Jurassic, having evolved from a branch of theropod dinosaurs. Other major events include the evolution of therian mammals, including primitive placentals. Crocodylians made the transition from a terrestrial to an aquatic mode of life. The oceans were inhabited by marine reptiles such asichthyosaurs and plesiosaurs, while pterosaurs were the dominant flying vertebrates.

In When Dinosaurs Roamed America Edit

The program moves from the Late Triassic of New York to the Early Jurassic of Pennsylvania, showing a pack of Syntarsus. These dinosaurs, closely related to Coelophysis, are hunting the primitive herbivorous dinosaur Anchisaurus, only to be driven away by a Dilophosaurus, which kills the Anchisaurus to feed its young. The narrator then explains Syntarsus and Dilophosaurus will become the gigantic carnivores such as Allosaurus and Tyrannosaurus rex, while Anchisaurus will become the sauropods.

We move on to the Late Jurassic of Utah. The land is in a severe drought. Stegosaurus is seen digging for water like a modern elephant but fails. 3 Dryosaurus look for water but fail to find any. Suddenly, a Ceratosaurus comes out of ambush and attack the Dryosaurus. The Ceratosaurus catches the slowest youngster. The 2 Dryosaurus hide under a Camarasaurus. Ceratosaurus swallows the baby. Later, some more Camarasaurus feed upon the trees, while the Dryosaurus pick their scraps of tree leaves. Later, a male Stegosaurus meets a female and tries to show off. Then the Ceratosaurus comes out of nowhere but the male's tail spikes hurts the predator. He tries to mate with the female but she rejects him. The rain finally comes. Some Camarasaurus head to the river. Apatosaurus come into Utah after the rainy season. Then an Allosaurus tries to attack a youngster but the Apatosaurus mom scares it off with it's whip tail. The predator walks away. The Allosaurus then attacks and kills the Ceratosaurus trying to hunt the Dryosaurus. The female Stegosaurus decides that he is a healthy individual and the two mate. Then, while walking away to avoid the dry season, an Apatosaurus breaks his foot and falls down, roaring. Then 3 Allosasurus attack it and eat it alive, killing it in time.

Add a photo to this gallery 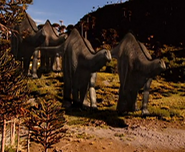 Add a photo to this gallery
Retrieved from "https://whendinosaurroamedamerica.fandom.com/wiki/Jurassic?oldid=4490"
Community content is available under CC-BY-SA unless otherwise noted.